Today the school has approximately 284 students representing over 24 different nationalities with approximately 41% of the students from Trinidad and Tobago. The success of the International School of Port of Spain has been a collective effort of parents, board members, faculty, administration and students.

In a short time, it has established itself as a leading international school in the Caribbean. The institution continues to strive to meet the needs of both international families and long term residents of Trinidad and Tobago. The success of this vision would not have been possible without the support and cooperation of many organizations and people.

After 25 years of providing international education, we are proud of our humble beginnings, and more so, proud of the vibrant learning community that we have become.

The International School of Port of Spain opened officially in September 1994. At this time the school realized its dream of parents and corporate citizens that had been articulated since 1990.

The International School is a private corporation registered in Trinidad, and its corporate shareholders are the Embassy of the United States of America, EOG Resources Trinidad Limited, British Petroleum Trinidad and Tobago and British Gas Trinidad and Tobago Limited. It is also registered with the Ministry of Education in Trinidad & Tobago and represents a special effort on behalf of parents and businesses to provide a college preparatory, holistic education for students aged 4 – 18. Mr. and Mrs. Thomas Tunny were the founding teachers and they started out at 18 Victoria Avenue with 50 students. During the past 15 years, the school has provided educational services for hundreds of students from 40 different nations around the world.

The teaching faculty, supported by a strong spirit of parent activism, led the way in promoting and establishing quality educational programs. By 1996, the school had completed an accreditation process with the Southern Association of Colleges and Schools in the United States. With this recognition, The International School of Port of Spain had joined a unique group of schools located around the globe that served the growing needs of students from the local community and expatriate families of the business and diplomatic community. The student population began to expand by 50% every six months and was soon located at three separate sites.

Since 1996, the school focused on designing and building a permanent campus to support the stated educational philosophy and goals of the school. Through the collaborative efforts of the Ministry of Education, the Port of Spain Corporation and Guardian Properties Ltd., an appropriate site was secured.

With the financial support of FINCOR and the appointment of Beaver Construction as the main contractor, building started in January 1998. Students moved to the new campus in May 1999 and during August of that same year, the entire facility went into use. It now provides a world class educational learning environment that rivals other such schools found in national capitals around the world.

As a private institution with a public purpose, the Board of Directors, school administration and faculty remain committed to making the International School of Port of Spain an integral part of Trinidad and Tobago. Initiatives have positioned the school as an important resource for college preparatory programs, instructional technology, special needs education and teacher training. Students, faculty and parents have always been engaged with a community outreach and service programs. These areas of involvement continue to grow with the new campus.

More recently the school embarked on a further expansion program to include a jogging track, soccer field and play field via a Memorandum of Understanding with the Westmoorings South East Community Park located on the northeastern end of the school site. This Park is expected to bring the entire ISPS and wider community together through sporting events and Family Day celebrations.

Mission Statement: ISPS is a vibrant learning community dedicated to developing passionate learners who strive for excellence and pursue their unique potential. We encourage resilience, innovation and collaboration, preparing students to act with confidence and integrity as caring global citizens.

Vision: Inspiring thinkers and doers to shape a better world.

Enrollment and Class Size: ISPS families are local nationals or members of the expatriate business and diplomatic  communities in Trinidad and Tobago.
Today the school has approximately 284 students representing over 24 different nationalities with approximately 41% of
the students from Trinidad and Tobago. Our population includes 12% American, 8% from Latin America, and 39% from other countries, including the UK and Canada.

Language of Instruction: The primary language of instruction at ISPS, in all grades, is English. Approximately 80% of our student population
has identified English as either their primary or secondary language, with Spanish as the highest second language
spoken.

Faculty and Staff: Fifteen full-time faculty members teach in the High School. Many of our teachers hold advanced degrees and/or have experience teaching in international schools world- wide.
ISPS teachers have an average of over 20 years of teaching experience. The maximum class size is 19 students. The average class size is 13 students.

Campus, Facilities, Technology: The International School of Port of Spain (ISPS) is nestled in the suburban region of North West Trinidad. It is a safe and stimulating environment for our students. Our campus sits on a site that is 1.3 hectares (145,805 s.f./ 3.3 acres).

Our Strategic Plan is rooted in our Mission and Vision. This plan is a foundation of our action plan which will provide a roadmap for our work together as a school over the next three years.

THE PROCESS: The Strategic Planning Committee was formed for the 2018-2019 school year. The committee initiated a process that engaged all stakeholders: students, parents, faculty and staff, and board members. The committee sought input on the direction that stakeholders envisaged for the school. This focus originated at the Board retreat in November 2018. The committee met regularly throughout the academic year and was advised by members of faculty and administration. The ISPS Board approved the ISPS Strategic Plan in September 2019. The Strategic Planning Committee will monitor the implementation of the plan, and The ISPS Board will review the progress on the plan annually.

We are pleased to share the ISPS Strategic Plan 2019-2022 with our community. 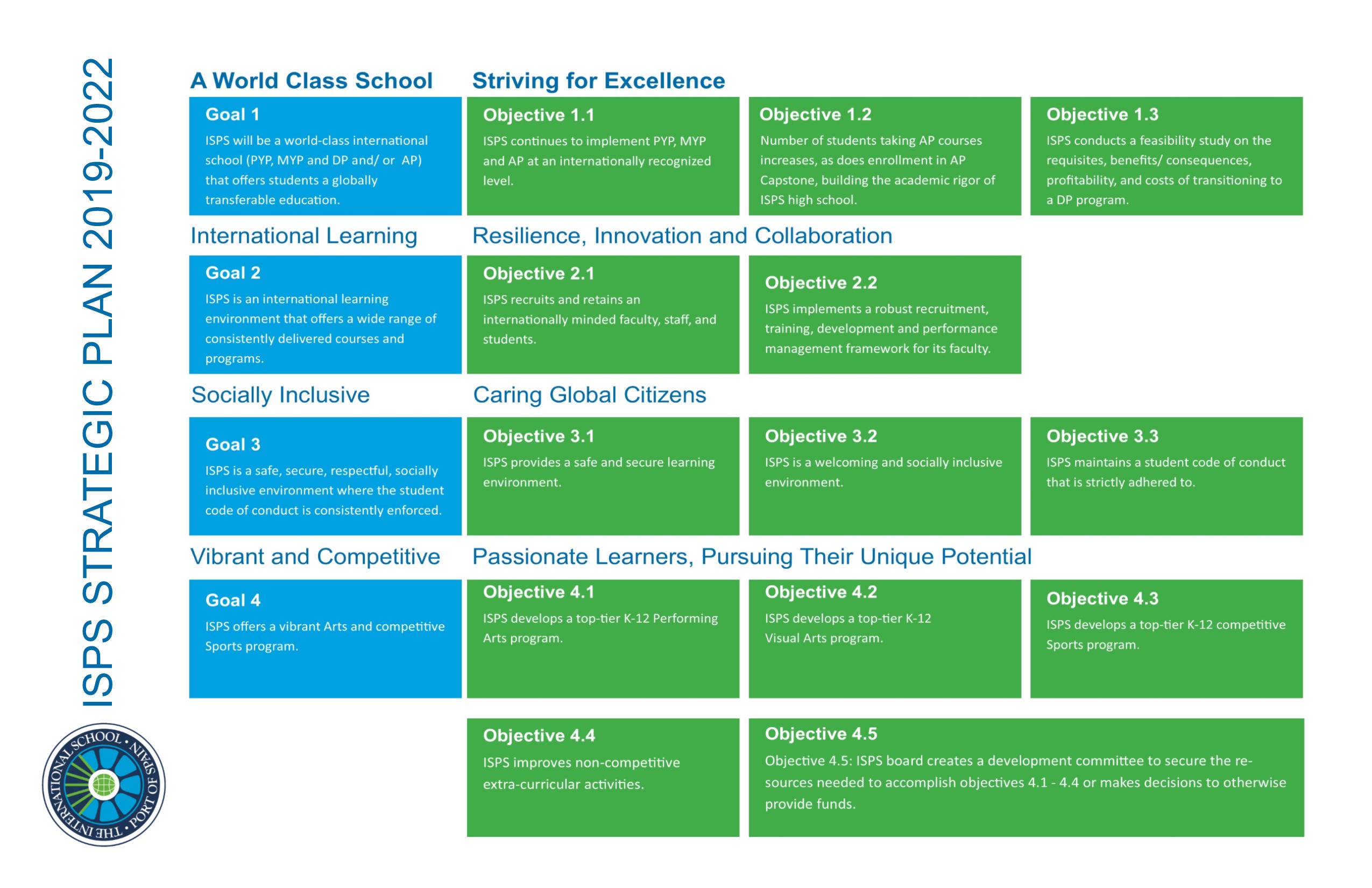